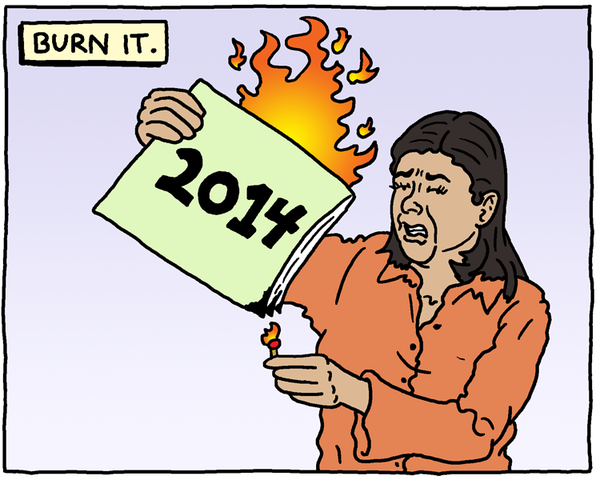 2015 is just around the corner and we are continuing with that noble Roman tradition of crafting new year’s resolutions. I haven’t made a new year’s resolution in years and I am not about to do it now. The next best thing is to make up resolutions for other people! How grand is that? All of the perks but none of the stressors on me.

I rallied one of my favorite tennis bloggers to get his take on the resolutions he’d like to see five ATP and five WTA players adopt in 2015. I  offer my own and then his fervent wishes.

Venus Williams: I resolve to stop tiring myself out by playing doubles at slams and focus on winning another Wimbledon by playing to my strengths: use my first serve & nail those volleys in a kickass white outfit.

Sloane Stephens: I resolve to ignore stans of all ilk on Twitter, recognizing that age is on my side (side-eyes these old broads), and win one title. At least one.

Genie Bouchard: I resolve to try and stay injury free, so that I can avoid the predicted sophomore slump. I will also continue to be viciously ambitious. Get used to it folks, it’s what all the millenials are doing.

Taylor Townsend: I resolve to accept my greatness and hit the gym harder. I might also snatch Martina Navratilova from Aga if I can manage it.

Victoria Azarenka: I resolve to review videos of 2011 to remind myself of what I am capable. Also, I resolve to stop trying the charm offensive and go back to entering courts with my head phones blasting and wearing shorts.

Rafa Nadal: I resolve to defend a hardcourt title in 2015 and accept all of Tommy Hilfiger’s suggestions about dressing myself.

Tomas Berdych: I resolve to approach every match as if I am facing Roger Federer at the Olympics and to remember how possible it all seemed right after Stan’s demolition of Rafael Nadal in Australia in 2014.

Grigor Dimitrov: I resolve to spend less time falling on the court and more time channeling whomever that guy was at Wimbledon who took out Andy Murray in straight sets. I also resolve to get my ego in check and show up at the World Tour Finals as an alternate, if I’m ever so lucky to be that close again.

Roger Federer: I resolve to continue to do my old man exercises, stretch my back and stop being surprised by streaky queens at slams (Rafa, Gulbis, Cilic, and Nole). Can I get Nole to double fault when he’s playing me at a slam?

Gael Monfils: I resolve to keep being awesome every where I go and up my odds in a final by aiming for just winning a point instead of dazzling the crowd.

One of my favorite passionate and occasional satirical blogger is RealzTenisFanz. He has some very intriguing ideas about the resolutions for some of his players. We ended up picking all but three of the same players! You can find his brand of tennis wisdom at http://realztenisfanz.wordpress.com/

First off, it was very difficult for me to find 5 men and 5 women that I cared two real shakes about but I looked through the list and I came up with something … just know this is because I really like you Andreen and I tried.

So on the Women’s

1) Serena Williams: I need her to get her clothing/apparel/gear together. It was a mess all of 2014. I cannot think of a single outfit that I liked. Well there were some decent pieces in doubles. However, singles was disgusting; the colour combination, the construction, overall presentation, they were all messy. French Open, Wimbledon and US Open. They were all horrible. Most egregious was the Miami outfit looking like a bad bottle of Gatorade. She does better for me in 2 pieces and not when she tries to go for the altogether bit in a dress. That animal print at the US Open. Atrocious. Anyway, I need that situation to be fixed as well as her hair. That Ambri/Brazilian/Remi nonsense has to go. I got two words for it Gurl Bye! I am not gonna say any more on that.

As for her tennis, I would really love for her to win the grand slam in 2015. She has really shown herself to be an all-court player and I think she deserves to get this under her belt. I am not a huge fan of Steffi Graf (blame that on the Monica Seles incident and also her husband) so I would really love it for Serena to be the undisputed best female player in the sport thus far. She has brought a lot more to the game, the sport as a whole and everything else good and bad to tennis and she really should get this one title. It is the only thing she doesn’t have. If she can’t win all four, I don’t mind her getting to 21 and lose to Venus at the US Open. I can definitely live with that. She needs to get back her Melbourne magic though. She was great in Melbourne but for the last 3 years, it has been mundane play.

I AM GOING TO NEED ALL PARTIES INVOLVE TO CEASE AND DESIST WITH ALL THIS NONSENSICAL WO-MANCE BETWEEN HER AND CARO. IT IS RIDICULOUS AND UN-TENNIS. If Caro is not a friend of Venus then she shouldn’t be a friend of Serena.

2) Venus Williams: Well it is no secret that Venus is like a thorn in my side. We have been through many ups and downs. I want to believe in my main gurl but she slays me all the time. Nonetheless, I think there might be some old magic left in her trunk and she can come through for me. I am going to need her to be making some major noise on tour this year especially at the French and Wimbledon. For some crazy reason I always envisioned this woman doing damage on the clay but she is messy and streaky. If she wants to get it done on the terre bateau, she is going to have to come to net and stick the volleys of course and that hot mess serve is gonna have to go far far away. She can pick up a couple tour titles but I am really looking for her to bring her expertise and experience at the majors and knock off some of these “pushers”.

3) Victoria Azarenka: I would like Vickie aka Victoria A to get her life and fitness together and be back in the top 10. I don’t wanna hear any excuses as well as any insufferable comments about her current, former and/or pending relationships. I am just interested in her and her tennis. Win and/or lose no excuses from her or her camp.

4) Petra Kvitova: I am going to need Petra to stay in the top 5. I don’t want no bullshit or jellyroll from this Czech. She needs to focus on tennis and not balls if you know what I mean. I don’t know what is her problem but she needs to stop acting like a college co-ed on Spring Break. Her favour is not some free handout as Costco. She’s gonna have to come up with better tennis except when playing Venus. That Wimbledon match still bothers me tremendously.

5) Simona Halep: Mrs. Koolaide Jug. I know people hate on her and call her a pusher etc. However, I really think considering the circumstances of the game, height, court, ball, equipment, she is pretty decent. She comes off like a Vickie without all the histrionics. She doesn’t bother me much. I would really like to see her have another solid year. This was a good year but clearly she was not satisfied and I like that. She’s hungry for more. Whether she can actually produce this is another story. I am not sure if much can be improved save for mental sharpness. I also want her to be more present v Shriekapova and sneak out some wins.

1) Roger Federer: Mr. Federer. It is no secret that when it comes to the Swiss maestro, I am greedy. I want him to win everything. However, this is not possible but I would like him to get two major wins this win including the Aussie Open title and re-claim number 1 spot. I know he loves Wimbledon but I can deal with him getting his 2nd French Open title over Divadal. That would make my year …. it would make my life in fact. I will never forget 2008 Wimbledon. Divadal deserves his comeuppance.

2) Rafa Nadal: Divadal. He needs to stay slamless in 2014 and come out of the closet. In fact I need him to get dragged out of the closet. The nonsense he and his Unclé Toni be playing at is really grating and I am sick and tired of all this media antics. Sick of his “sickness” etc.

3) Novak Djokovic: Djoker. This is going to be really hard. He is gonna have to make me like him. I respect his game but he reeks of being a douchebag a lot of the times. I am gonna need him to be a respectable tennis player and not some media monkey puppet.

4) Gael Monfils: I am going to need Monfils to play an entire year of professional tennis. I don’t know if he imagines that he can start a “Globetrotters version of tennis” but I am gonna need this Frenchman to get into the top 10 and stay there.

5) Borna Coric: I would like this young player to be seeded by the time the US Open rolls around. I like his attitude and his game. There is of course room for development but I would like to see his game get on board and for him to do some damage.

Well, those are certainly resolutions that you won’t find everywhere. Because I know some of ya’ll have a dirty mind, I asked Realz to clarify his resolution for Divadal and he said “Davidal should play it straight with us, himself and the media. The level of misinformation from his camp makes it difficult for us to take him seriously unless you are his most ardent fan.”

Thank you @realztenisfanz for keeping us on our toes in tennis land!