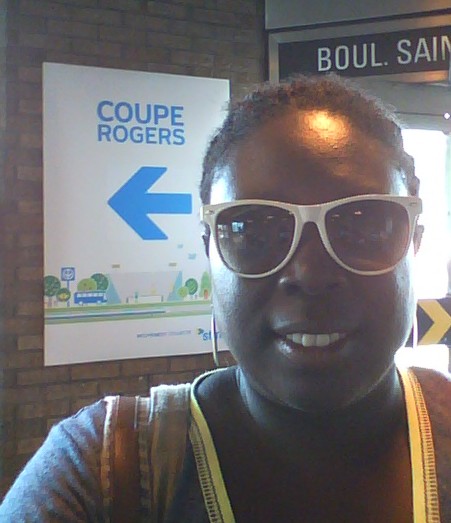 Fed canceled his appearance in Montreal but no fear, Delpo was going to be there, so I hopped a jet plane for Montreal and did my first turn on Airbnb (more on that later).  Montreal has been hit (2009) and miss (2011) in the past but it’s never really stunk up the joint as much as it did for me this year. I usually go closer to the earlier rounds when tennis matches are aplenty but this time I decided to go for Wednesday and Thursday: less matches but hopefully better match-ups. Then the rain came, followed by Canadians having a resurgence.

I can’t begrudge the Canadians their moment in the sun, but the crowds made the traditional side courts fun an impossibility. As local faves thrived, it became a challenge to get into the courts and watch matches. Usually, folks meander, giving you an opportunity to catch a few matches during the day. But with locals doing so well, those Canadian stayed glued to their seats!  I did get to watch a lot of tennis but mostly on the big screen which is really not the point of a live tourney. Then, the tournament decided that it would be fun to cover all the courts with tarp as a noise prevention issue? I’m not certain why but it really detracted from the look and feel of the tournament. If you can’t turn around and catch a glimpse of a match that might compel you to stay and watch, then happy accidents just don’t occur. I hope tourney officials will reconsider this move and give us back the wide open spaces that makes being at a live tournament such a feast for the senses.

By Thursday, I was pretty much ready to call the tournament over and then Roanic vs Delpo happened and that just put me in a bad mood. As you’ll recall, Raonic was one of my favorites to watch in 2011 but since incident really put a pall over my tourney and I just wanted out of there. Not even Nole vs Istomin, which turned into a real battle, could save the day. That should have been my sign that my tennis summer was not going to improve.