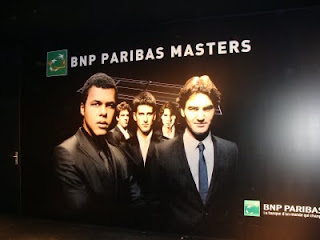 So, I did manage to wrangle a bit of work to increase my budget, so that I could tackle the Bercy tournament. Familiar faces greeted me on my return to Paris! How sexy is Tsonga on the left? Don’t you just love how prominently they display him right next to Federer as if he’s Fed competition, instead of Nadal? I’m just happy to see Delpo peeking out on the left in the back and Djokovic being the spoiler in the middle. Unlike Shanghai, all the big boys came out to play.
This time around Paris was very good to me, because I was good to me. Much like I created the mind freak in Shanghai, I avoiding doing the same thing in Paris. I decided to let the city be itself instead of the romantic fantasy that I envisioned in April: a city greeting me with open arms. Can I let you in on a secret? Paris is one cold b*tch! Between getting rid of my closet for a hotel room, watching tennis in an old dark basement, and clutching my purse for fear of pick pockets (who were having a grand time with the tourists I saw!), Paris again proved to be short on charms but this time, I didn’t mind it. I must read the novels of old to see why my brothers and sisters fled to this city. I’m still not convinced, but luckily I had tennis! 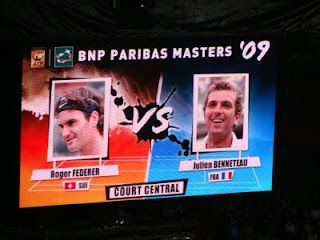 Do you know who also wanted out of Paris? Federer. After comfortably winning the first set, Fed took a mental vacation which was all the very hungry and wild eyed Julien needed to steal the 2nd. By the time Fed checked back into the match he was down a break and couldn’t seem to bring the fire power to take the 3rd. I don’t care what Fed is saying, I am sure he wishes he could have been home seeing what new things his twin daughters were doing instead of trading balls with some guy who thought taking down a subdued Federer was the best moment of his career. Annoying! 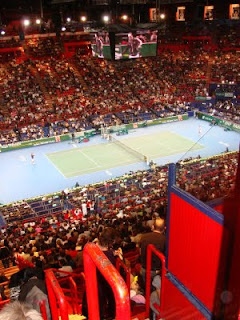 My vantage point for the Fed match. Since Fed took to wandering mentally, I did the same and took a gander at their banner of champions and came across this guy, 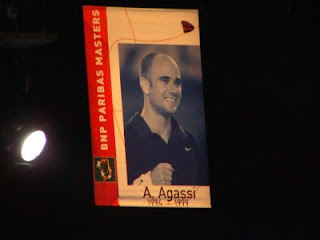 I used to follow tennis way back in the day when Sampras and Agassi were tennis Gods. I was definitely a Sampras fan because of his lack of emotions and his efficiently dominant style of play. I hated Agassi’s scrambling and his constant bid for attention. Little did I know that I would be Agassi’s staunchest defender years later! As I’m sure you have read everywhere, Agassi has admitted to using crystal meth for a year and wearing a wig, all in a desperate bid to manage his depression and all consuming hatred of tennis. While Martina thinks he’s second only to Roger Clemens and Safin wants him to give his money back to the ATP, I liked his bid at honesty. Most folks believe that he just trying to sell more books but I think his honesty now reflects how far he has come from the “image is everything” guy he was back in the day. Yesteryear, I had little patience for this guy whose emotions were laid out there for all to see, the good and the bad. Now, I respect and feel compassion for the depths to which he fell and his resolve to turn his life around. 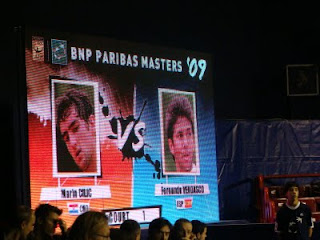 Back to Paris where the story of note for me was who was going to take the last two spots in the London finals for the top 8 players. The top six were already decided with Fed, Nadal, Djoker, Murray, Delpo, and Roddick. Even though Davydenko (YAWN) got eliminated, he played enough tournaments to secure a spot, leaving poor old Verdasco, who lost to Cilic, at the mercy of everyone else! His spot could only be secured if other players lost, so that left me in a tizzy today: is my Verdasco fan love greater than my Tsonga fanlove? Should I cheer for Nadal to take Tsonga down, thereby ensuring that Verdasco keep his tenuous hold on the 8th spot? Or get behind my disappointing to date Tsonga and cheer on his triumphant return to the big leagues? In the end, my cheering probably didn’t matter as Nadal took Tsonga down swiftly in straight sets, giving me plenty of time to catch my train to London.
Next up, the Barclay Finals beginning November 22nd
Be kind and share...