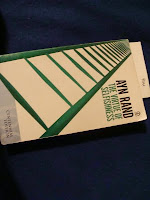 I just got back from the Shanghai’s ATP Masters 1000 tennis tournament. It turned out to be a wonderful time except for a minor freak out. Well, maybe minor isn’t quite the word; I actually considered flying home early, but luckily a calmer head prevailed (my sister’s) and I stayed through the week and got a chance to enjoy some pretty good tennis.

The flight to Shanghai is pretty long (17 hours in all), so I brought two books to pass the time. I’d always heard of Ayn Rand, so when I ran across her book, The Virtue of Selfishness, I decided to give it a go. I figure how bad could this woman be? Sure when people say her name, they often have a sheepish, guilty look on their faces but surely some of her ideas have merit. It was a gentle introduction, as the book contains a series of previously published short articles introducing Objectivist philosophy. She laid out her arguments in that wonderfully logical fashion that I’ve always enjoyed in philosophy. She contemplates the nature of values and then articulates why men need them. Painless and I’m with her thus far: As “man has the power to act as his own destroyer,” by choosing to be conscious or unconscious, he is faced with the burden of determining the right course of action for his life; his life is volitional, not automatic like other animals. For the Objectivist, man must then choose actions, values, and goals that will allow him to retain the ultimate value, his own life; their cardinal virtues that sustain life are rationality, productiveness, and pride. The practice of these virtues leads to the acquisition of these essential values: reason, purpose, and self-esteem. Huh, oh! There is a place for pride in this ethical system? Most of the ethical systems I’ve encountered celebrate humility; you know what cometh before the fall! I knew I was headed for trouble, but my head loved these ideas!

Right on Rand: a self-directed life is better than one lived for others; self-sacrifice and self-annihilation is a road to pain and misery; and productivity through purposive work is a joy I only hope to find again. Then I hit the article on mysticism, which explores the Objectivists’ position on the primacy of rationality over irrationality and my brain short-circuited, but I didn’t know it ‘til later. A confession: I harbor a love for the irrational. I like to know but I also love it when something feels unknowable, mysterious, and OTHER. According to the Objectivists, man needs self-esteem which he acquires as he masters and controls his environment through his reason alone. Objectivists believe that traditional morality undercuts reason and places a value on faith, which asks that men suspend their senses (and all the knowledge these sense offer of this very real world) and accept the possibility of an unknowable (other world beyond their immediate senses) working in their life. You know what they mean, GOD! They believe this projection of another “more real” world incapacitates us for the reality of this world, which demands that we be self-confident and self-reliant in our pursuits, qualities wholly at odds with the doubtful, guilty, and fearful men celebrated by the faithful. Bill Maher would be heaven! How then can such a (traditionally moral) person have enough esteem to value his life and his pursuits? How can he even be psychologically healthy?

Here lies the rub, the meat of a conflict with which I have struggled for a long time, articulated pretty compellingly by Rand: how can you trust your pursuit of the worthwhile life when the very faculties you use to make those judgments have been deemed faulty or flawed? If I can’t trust reason and I can’t be at the mercy of my feelings, then how the heck do I determine the good life? If you remember from my first few postings, I felt unhappy and bored because of the primacy I had given to reason and logic in deciding my course of actions, so I thought it might be best to try to follow my feelings. Yet, feelings are not entirely trustworthy as they are transitory, unreliable, and uncontrollable. What then? What source of knowledge can you use to help you make the best choices for your life? If the Objectivists are to be believed, a life defined by orderly, rational thinking inevitably leads to happiness, which they equate with the accomplishment of worthwhile goals you have set for yourself. Say, my goal of traveling the tennis tour this year. Plus, think about the very athletes I have been admiring on my tennis travels: the best ones are those who can approach the game with confidence, self-reliance, self-esteem, and pride, while the ones apt to fail/lose their way show doubt, self-distrust and fear. But surely, the world is not this stark polarization that Rand suggests, prideful or humble? Are we really made lesser with the “recognition of the helplessness, the smallness, the impotence of one’s mind.”? Wrongly or rightly, I was about to test out some of these ideas out in Shanghai, the farthest I had traveled in my attempts to follow the ATP tour.

Next up: Crashing and Burning with Rand

2 thoughts on “Riding the Rand wave”