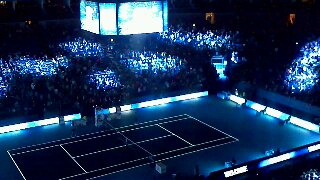 The top 8 men and doubles teams are in London’s O2 Arena, aside from Andy Murray who is sidelined with an injury. While better analysts have broken down the field here and here, I am focused on the O2 as a fan. Alas, no media credentials this week.

I have made the trek since 2009 and for the past 5 years, I’ve played Russian Roulette with tickets. I order them in January, so I’m flying blind as to who I’ll see in November. Some years, I order the entire round robin sessions only to have the semis virtually locked down within a few days leaving us with matches that are more for glory than for points. Last year, I struck on a formula: if I purchase tickets for the 3rd and 4th day, I’m guaranteed to see everyone in both groups. Now for the 1st time in its history, the ATP has decided to mix the groups (playing Group A & B on the same days), so now I have no idea what I’ll find on Wednesday. Foiled by the ATP again! Luckily, I was able to score last minute tickets to Tuesday’s night session where I’m scheduled to see Federer vs Djokovic. Bless ViaGoGo because the Barclays site has apparently decided they can’t be bothered with US credit cards. Was it the shut down?

While the order of play for my upcoming days at the O2 might be unclear, one thing that’s predictable is that I’ll have an stress free time as a spectator at the O2. I will easily get to the area on the Jubilee Line from most parts of London. The convenient North Greenwich stop leads you directly to the O2. Maybe this year  I’ll trip myself up by finally hopping on one of those river taxis the players take to the arena. I’ve been promising myself I’ll do it but it’s usually too cold in London for that to seem like a practical way to travel.

Once I am inside the O2, I can either venture to practice courts to catch a practice session with anyone but Federer. He usually practices at a club off-site or on the stadium court before his match, so don’t dawdle if he’s on the order of play! Last year, he played a morning session, so I ventured in early and managed to catch a bit of his practice. In my inaugural and less naive 2009 year, I watched Rafa and Delpo practiced for hours on the practice courts. Boy was I die-hard.

If I am at the O2 all day for both sessions, it’s usually a quick coffee, practice courts, and matches. Between the two sessions,there’s usually a healthy few hours to spare. I’ll either take in the The British Museum, a movie (yeah Twilight was watched) or grab a meal. One year, I hung out with a young mom and her son, so we did the various booths that were set out for the Finals. It’s not my usual thing but testing out my serve and sampling some Pimms wasn’t a bad way to pass the time. The O2 offers enough variety of foods for you to have your pick of something different throughout the entire Finals,but just stick to old faves: Wasabi with its food on a conveyor belt & GBK (Gourmet Burger Kitchen). Those are usually quick and easy. Don’t even try to get into Pizza Express. What do they do to their pizzas? For that one, expect at least 40 minutes wait.

For the past few years, I’ve seen more and more twitter buds show up at the O2. This year, I already plan to meet up with a few: @yolitatennis, @rfsatar, and hopefully, @tumcarayol.

So, while folks like Stan the Man is soaking up his first time at the O2, I’m going to be hoping for more of the same good time I usually experience at my last live tournament experience of the year.