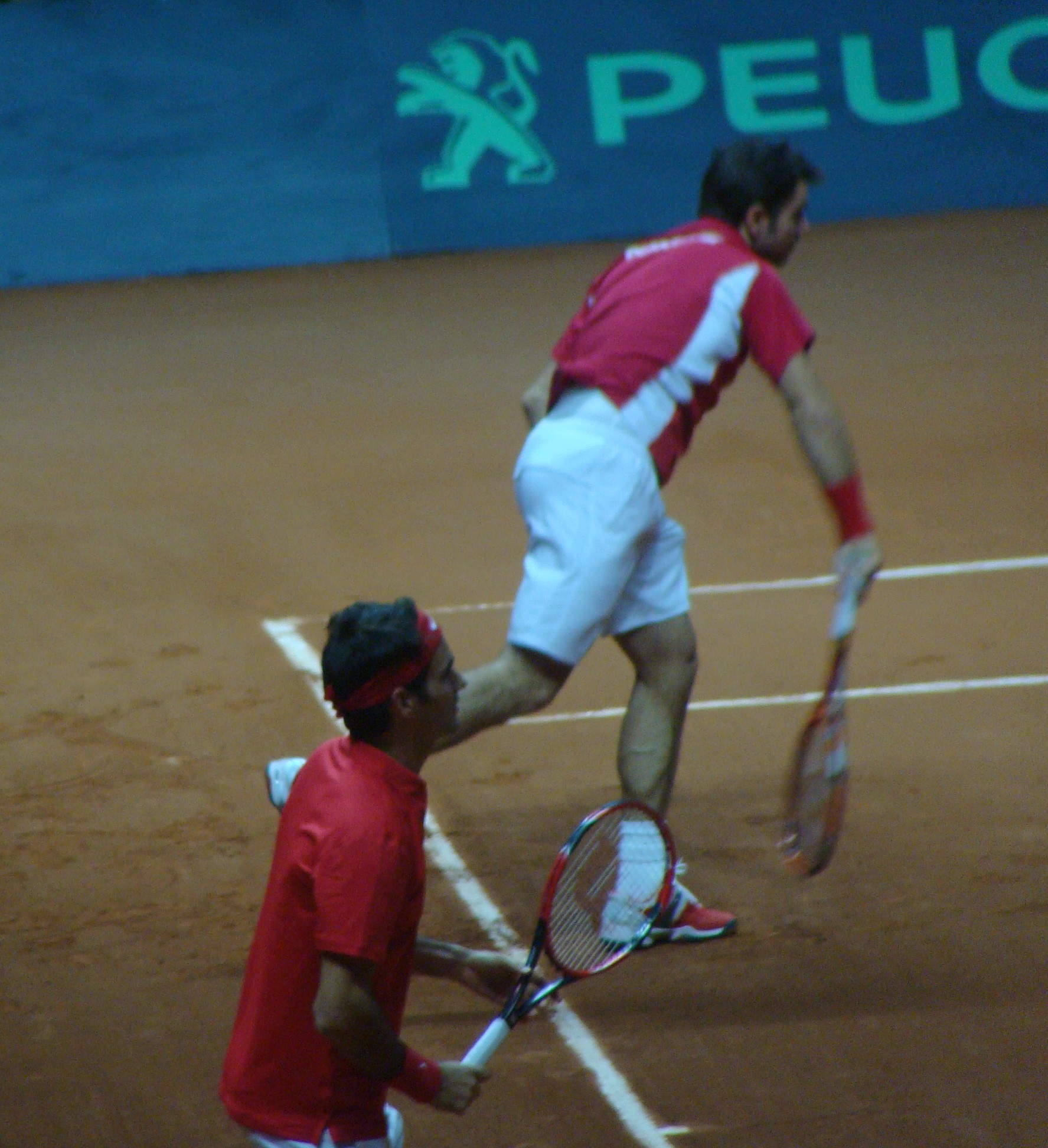 I bet that’s the first time those lyrics were quoted about tennis!
I’ve been pondering the things that are missing from Federer’s treasure chest of late, namely a single’s gold medal and the Davis Cup title. It has struck me that God or life has a wicked sense of humor. How like Him or It to grant Federer a gold medal only as part of a doubles’ team. Then this week when he finally has the opportunity to rectify the missing Davis Cup title, he should be wholly dependent on its very team-based structure. Without Stan’s win yesterday, the Swiss would be up shit’s creek and today, he needed the symmetry and partnership that only the very best doubles’ player possesses to keep that Davis Cup title dream alive for the last day of the Tie.  Federer, who has always charted his own course thank you very much, is showing this tennis fan why doing things together is one of the best things to celebrate about Davis Cup. With that odd little nugget in the back of my mind, I ventured out to day 2 of Davis Cup.
I knew that the Swiss would most likely play Federer as he definitely needed more match play, the open question was who would be his partner?  As we sat and waited for the start of the match, a rousing cheer went up in the crowd when it was announced that Stan Wawrinka and Roger Federer would take on Julien Benneteau and Richard Gasquet for the doubles point. I did a bit of a double take because I only saw Benneteau and Gael Monfils practice that morning. As the match played out, I was left to wonder if this was the best team the French could have fielded.
At the start of the match it was clear that the Swiss fans had learned from yesterday. They would cheer on their team after every single point! No sitting in silence as they did when Federer played Monfils. This time around, the energy from the Swiss camp was electric. I actually thought we might exhaust ourselves before the match was finished.
The Swiss got things off to a great start as they earned two breakpoints on Benneteau’s serve in the 6th game. Benneteau saved one with a great overhead but then Stan hit a forehand winner that just clipped Gasquet. Stan consolidated at 30 for 5-2. The French would hold to 15 eliciting boos from the crowd when someone pinged Federer. Federer served for the set and converted their  first set point when Benneteau’s forehand return went into the net.  The Swiss had sealed the set in 29 minutes!
The second set was wholly trickier. Everyone says certain sets are a must-win but given the intense support from the French crowd, I thought the Swiss needed this set just to keep the fans at bay and put a bit of doubt in the French camp’s mind. The French held serve to start the set. However, Federer immediately faced two breakpoints. He was able to save both and win the game to get to 1-all when Stan poached the net off a good Federer serve. He earned an appreciative butt tap from Federer for his efforts. The French held comfortably for 2-1 and the Swiss again faced a breakpoint as Stan served for 2-all when Federer fluffed a volley at net but he made up for the missed volley by hitting a forehand volley winner to take their first advantage.  Finally, the Swiss had their most comfortable service game to tie the set at 3-all which resulted in exultant cheers from the Swiss section. The cheers quickly turned to gasps when the Swiss again faced a breakpoint serving at 3-4. By the time Federer easily held for 5-all, I was dying from the tension. Who’s going to break first?
The break would come after Stan and Federer hit return winners to manufacture two breakpoints. An absolutely scorching backhand return winner from Federer would give the Swiss the break and then Stan served out the set at love for 7-5. The Swiss were on fire and the French team looked out of answers.
In the third game of the third set, the Swiss had one breakpoint chance in a very long game but failed to break. I immediately imagined this would be the turning point that the French needed to get the set. But while I was imagining the worst, the Swiss broke for 3-2 and I cannot tell you how they did it because I was too busy panicking from the 2-1 game. I do know that Federer consolidated for 4-2 and seemingly within the blink of an eye, the Swiss had match point on Benneteau’s serve at 3-5. Though Benneteau would serve two double faults, he survived the game, forcing the Swiss (Federer) to serve for the match. Federer served out the match at love with Stan contributing the little dink volleys to end each point. Stan and Federer embraced at the end of the match as they earned the doubles point and gave themselves a chance to seal the deal in the first singles rubber on Sunday. 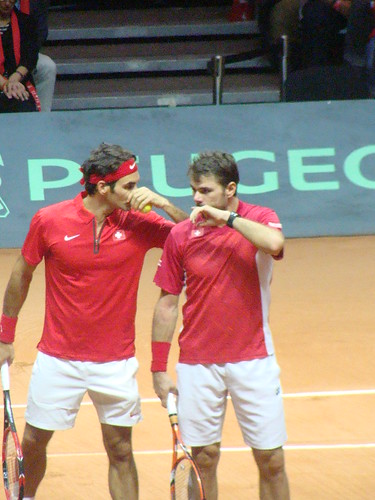 Whatever tomorrow brings, I am happy I was able to see the return of winning Federinka on doubles Saturday at Davis Cup. 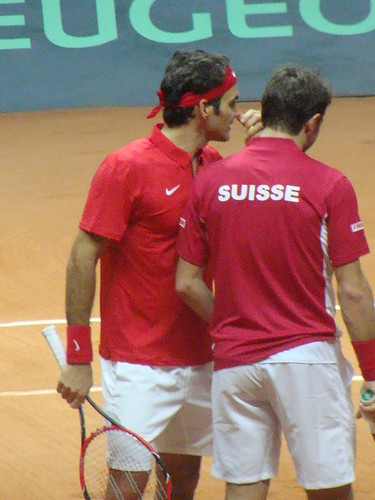