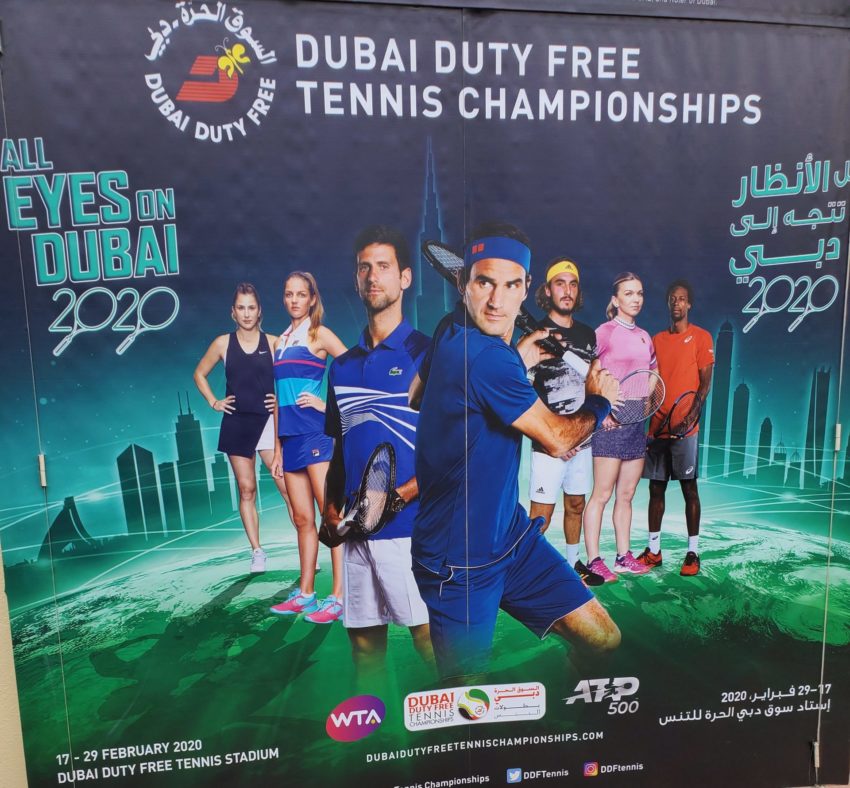 By Andreen Soley of soleytennistravels.com

(March 1, 2020) DUBAI, UAE – On TV screens, the Dubai Duty Free Tennis Championships seems impossibly grand and too fantastical to contemplate traveling to from the US. Yet, it was remarkably doable, even with its 16 hours + flight!. After watching Roger Federer declare at the 2019 trophy ceremony that he would be back, I added Dubai to my tennis bucket travel list. An August 2019 direct, nonstop flight to Dubai from LA on Emirates Airlines for less than $1,000 sealed the deal; that price was too good to pass up. I like to use Google Flight to track flights to destinations I have decided to visit. As soon as I see a price I like, I grab it.

However, researching Dubai as a destination proved challenging. I quickly uncovered a world of expats writing about staycations at local hotels and top ten lists of must see sites that seemed to pull from the same press release. It was difficult to know what was real or mere advertising. Fortunately, I stumbled across the Get Your Guide App, which promises to provide an array of tours at destinations around the world to suit every need and taste. Using this App, I put together an itinerary of sightseeing in Dubai to slake my interests, while leaving room for tennis in the evenings. If you have ever considered Dubai Duty Free Tennis Championships as a destination, here’s a quick guide to help you place it on your bucket list.

Accommodations are plentiful in Dubai within a range of budgets. I vacillated quite a bit about where to stay as I had little sense of how easy it would be to get around. I finally decided to opt for two locations. I chose The Kempinski Hotel by the Mall of the Emirates and the player’s hotel, the Jumeirah Creekside Hotel. I wanted to experience a bit of that much talked about Dubai luxury with its amazing malls and I wanted to be close enough to the tennis that I wouldn’t mind staying late into the evening if matches went long. If you don’t have the option of doing both, opt for the player hotel. The rooms are sprawling and most come with a shower, a bathtub, and a sitting area that would be ideal for a few friends to crash and share the cost. You can easily walk through the hotel’s lobby area to the tennis tournament. This year’s semifinal between Novak Djokovic and Gael Monfils ran until about 9:45 pm with the last men’s double semi-final match immediately following. You can easily retire to your room or grab a drink on site until about 1 am without worrying about a taxi or taking the metro. In addition, the hotel offers shuttle buses to the Dubai Mall and other destinations around Dubai.

I took taxis, the Metro, and the bus and felt comfortable doing all three on my own. As the Metro was attached to the Mall of the Emirates, that location proved to be a godsend for early exploring. If you fancy using the Metro, try to find a hotel on one of the main lines. I bought a refillable Metrocard card at a station and spent less than 50 AED over the course of 4 days. I was able to take the Metro to Deira and the Dubai Mall. I took taxis when I moved to the Jumeirah Creekside Hotel because I shared those rides, but the Metro station (GGICO) is only a 10 minute walk away.

The tournament sells three categories of seats for both the WTA and ATP Championships, respectively. They are Grandstand, Prime A (front two rows in all sections but VIP), and Prime B tickets. They are available as Daily or Season tickets. As media, I sat in the very last row in the Prime B section for the men’s Championships. The view was quite good from there, so any seat should be considered worthwhile. Your only challenge may be the sun which shone directly on the umpire side in Grandstand’s east side until sunset, approximately 6:15 pm daily.  A few fans I spoke with purchased their tickets a month out before the tournament and found it easy to get them online. The concierge at my hotel suggested that fans get tickets at least 2 months out because they sell out quite quickly. It may be best to invest in a season ticket if you want to see your favorite player and don’t want to worry about sold out seats. Buying on the day during the Championships was a challenge for the few fans I spoke with on the grounds.

I stayed in Dubai for 8 nights and had an outing at least once per day. Here is a list of things I think are worth your time. For me, I like a mix of the well known with a few surprises. As long as I have a chance to learn, move hassle free as a tourist and have fun, it made my list.

Visit Old Dubai in Deira. I booked an old Dubai walk which met at the Arabian Tea House Restaurant. I had one of my best meals here. Despite all the rave reviews about Dubai’s finest restaurants, some of which I tried, my quick breakfast of bread, pancakes, and a mint smoothie was the most flavorful. My favorite part of this tour was the walk through the Dubai Museum which is housed in the Al Fahihi Fort, dating back to 1787. The visit gave me a good grounding in Dubai’s history, its relationship to other members of the United Arab Emirates, and the country’s continued transformation. The tour included a walk through the spice and gold souks as well as an abra ride. Abras are small motorized water taxis that can hold about 20 people. We took one as a tour group  to get to the souks. I needed to get one on my own to return back to my hotel via the metro.

Day Trip to Abu Dhabi to visit the Sheikh Zayed Mosque. I booked a tour to visit both the mosque and the Louvre, Abu Dhabi. I preferred the pick up from my hotel and the air conditioned transport as opposed to navigating there on my own.While I appreciated the architecture and use of space at the Louvre, the visit to the mosque was the most gratifying. I found the tour a bit too cursory in content, so if you can find  a way to visit on your own and use the audio guide, it will be more enriching. Nevertheless, the scale and grandeur of the mosque makes it worth the 90 minute drive outside Dubai.

Go atop the Dubai Frame. This 150-meter-high picture frame is the largest frame in the world and opened as a site in 2018. There is a brief historical survey of Dubai history at the bottom, but then you can travel up to the Sky Deck for views of both old and new Dubai. Beneath your feet is clear glass that allows you to see the structures below. It’s a tad disorienting since I hate heights but it’s a fun way to spend the morning before venturing to the tennis.

See the Dubai Miracle Garden even if flowers are not your thing. I am particularly a fan of seeing all the things that can be covered by flowers such as an airplane or a floating lady. It’s a burst of color at every turn. If you get too tired or overwhelmed, you can always lay on one of the hammocks that are sprinkled throughout the site. Helpfully, there is a direct bus that goes from the Garden to the Mall of Emirates. You can pick it up just outside the Garden entrance.

The two most famous buildings are the Burj Khalifa with its observation deck on the 124th floor and the Burj Al-Arab, the world’s tallest hotel at 321 meters high on a man made island. Having done both, I would opt for the Burj Al-Arab because it’s a richer and more complete experience.  The Burj Kalifa is crowded and can involve long lines even with fast track tickets. However, the Burj Al-Arab will require a minimum spend to get on site. If you want to see daytime views, book an afternoon tea at the Skyview Bar on the 27th floor. If sparkling lights are more your scene, you can book a table for drinks after 7 pm. I took advantage of the tea and the cocktail booking on this trip and each has its appeal, though the cocktail minimum spend was less expensive. It was 300 AED per person ($80 USD). You can arrive a bit early and soak up the architecture and catch some of the fishes on display in the aquarium.

A word about malls which are ever present in Dubai. Frankly, I found them initially confusing and disorienting as I was usually looking for the Metro or the entrance to a site. They also contain stores I can see in Beverly Hills, so that was less of an attraction to me. Still, of the three I visited, the Dubai Mall was the most over the top; the Marina Mall was easiest to navigate as a shopping experience, and the Mall of the Emirates’s ski slope made me gawk.

Finally, as someone who enjoys walking, Dubai is not an ideal city for a stroll. After the visits to each tallest or biggest, Dubai’s grandness seems to be best observed from above. On the ground, you encounter sprawl and construction sites, a testament to Dubai’s continued growth. The closest one can get to enjoying Dubai on the ground is via its waterways, which was a very charming way to get around and explore. If seasickness doesn’t bother you, I highly recommend a speedboat ride of Dubai. You won’t regret it!

As tennis begins at 2 pm (5 pm from semifinals onward) and 7 pm at the Dubai Duty Free Tennis Championships, you can start the day exploring Dubai or its surrounding neighboring cities and end it with tennis under the lights.  The best of both worlds.

I spent three days at the Championships. Its closest approximation in atmosphere and layout to other tournaments I have attended is the Citi Open in Washington, DC. It’s intimate, relaxed, and family friendly.  When the stands became crowded towards the latter parts of the weekend, it still felt like the grounds were inviting and welcoming. In a city known for glamour and futuristic modernity, the Championships were surprisingly low key and charming. As Tsitsipas said in one of his pressers, the “warmth of the people” is his favorite thing about Dubai. I have to agree.

Ms. Soley of soleytennistravels.com was in Dubai covering the Dubai Duty Free Tennis Championships for Tennis Panorama News. Follow her on Twitter at https://twitter.com/A_Gallivant