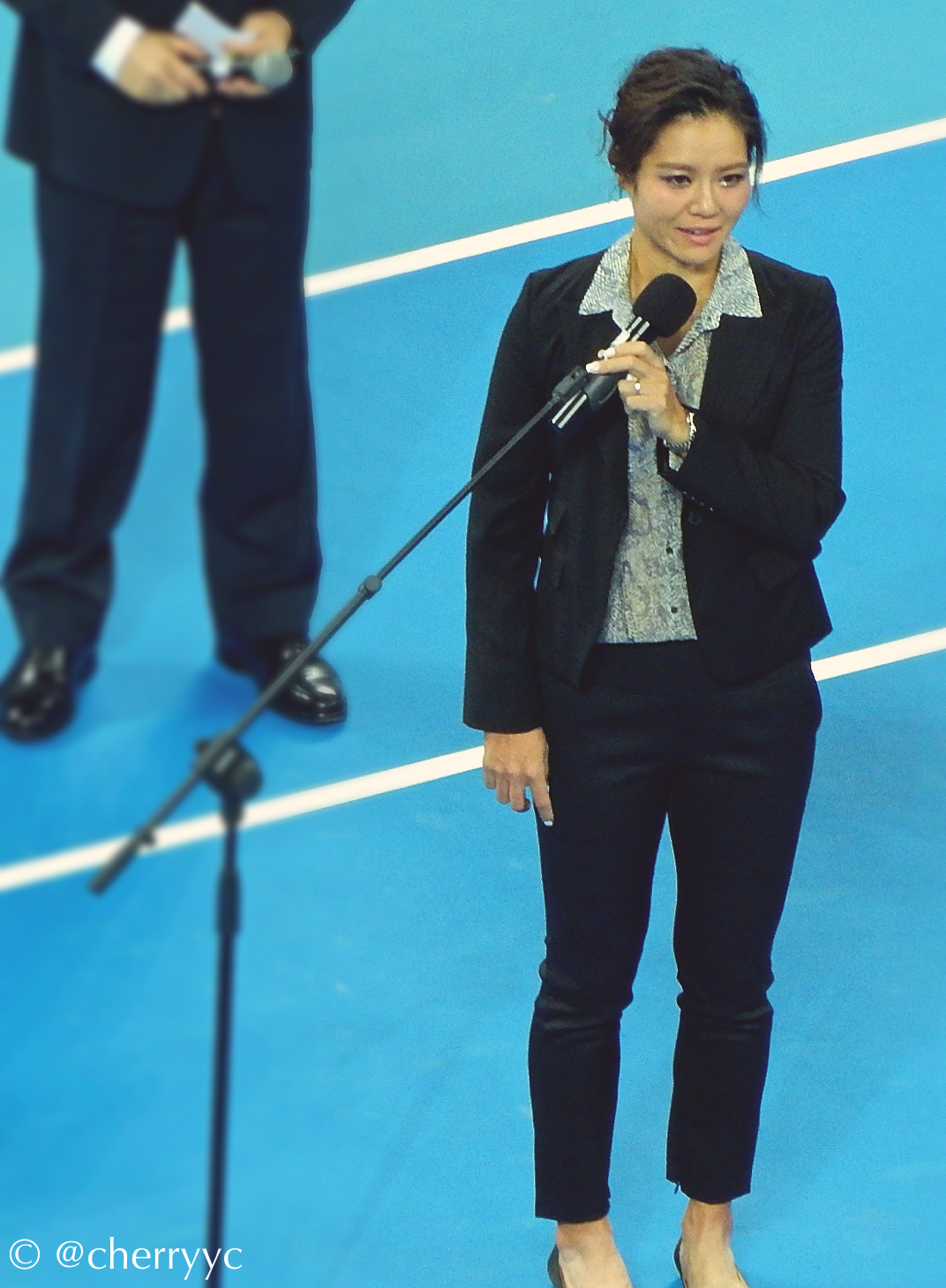 The China Open officially became a combined tournament in 2004, so this year marks its 10th anniversary. Inopportunely, I left China in 2004 and have spent the exact same ten years studying and living abroad. So despite being a native Chinese, I never had the opportunity to visit the China Open until this year. Little does one expect China’s biggest tennis star, Li Na to announce her retirement from professional tennis just a little over a week before the beginning of this year’s China Open. Not only did my trip to the China Open coincide with its 10th anniversary, I was fortunate enough to attend Li Na’s retirement ceremony and say goodbye to her on my very first day at the China Open. 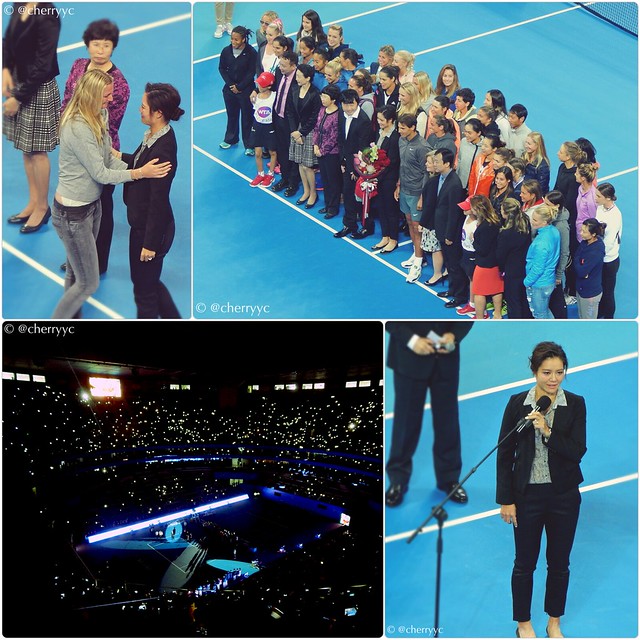 (Players and fans pay tribute to Li Na at her retirement ceremony on September 30, 2014)

The China Open, or rather the National Tennis Center, is located just about 1.7 miles from the world-renowned Birds Nest Stadium. It has 12 competition courts and 6 practice courts, with a total capacity of 32,400 spectator seats. Its two main show courts, the Diamond Court and the Lotus Court have a capacity of 15,000 and 10,000 respectively. The venue also hosted the tennis event at the 2008 Beijing Olympic Games. Therefore, it is fairly easy to plan your tennis trip around the location of the venue and navigate your way to the China Open when you are in Beijing. However, make sure that you book your hotel early, because China Open’s main schedule falls within the 7-day National Day Holiday of China (from October 1st to 7th). There will be massive numbers of tourists visiting Beijing during the seven days so hotels are in high demand. I booked mine about a month in advance, a small and cozy budget hotel call the Home Inn that is not far away from the Tennis Center. A 20-minute bus ride every morning does the trick. Yes, do also make sure that you book a hotel that is relatively close to the venue, so that public transportation is a possibility. When you are leaving the grounds, especially late after the night sessions, you’ll realize that it is not that easy to hire a cab right outside the Tennis Center, because too many people are already there waiting.

Purchasing tickets for the China Open is overall pretty stress-free. (Not exactly the case for myself, though, as I was too worried that my favorite players were gonna lose before I could get there. That is why I bought my tickets the night before I got on the train to Beijing. You probably want to buy them a bit earlier if you are not like me). Tickets typically go on sale in late August all the way till the conclusion of the tournament. You can either buy them online via China Open’s official online store, or directly from the ticket booth when you go to the Tennis Center. Get your exchanged currency ready, as I do not think they accept currencies other than RMB whether you are buying tickets, souvenirs or other things on the grounds.

When you are buying tickets online, for Diamond Court, the site provides you with a price table and a seat map as follows, which is self-explanatory and very convenient. (1 USD equals to about 6 RMB).

If you have been to Indian Wells, the Diamond Court is only a tad smaller than Indian Wells’ Stadium Court. I got Grand Stand Class B tickets for all my session and I would say the view is decent, basically equivalent to the lower middle Loge seats at Indian Wells.

Lotus Court tickets cost 80 RMB each day through the entire tournament. Seats are not specifically assigned. I am not sure about previous years, but for this year, early purchasers of Lotus Court tickets were even given a 50% discount. So for 40 RMB (about 6.5 USD), you are able to get possible court-side seats for Slam champions like Petra Kvitova or Andy Murray. That is a huge bargain.

Beware, you cannot get in Lotus with Diamond tickets (and vice versa), unlike at the US Open where tickets for Arthur Ashe get you access to every court including Louis Armstrong. But no need to worry about finding out that your favorite player is scheduled to play on Lotus when you have only gotten Diamond tickets, because there is a ticket upgrade booth right outside Diamond Court. There, you can pay a very reasonable fee (around 10 to 20 RMB) to upgrade your Lotus or Ground Pass tickets to Diamond tickets, or you can also “downgrade” your Diamond tickets to Lotus. You will find this upgrade booth even more helpful if you unfortunately encounter rainy days. Matches on Diamond will not be affected because the stadium has a retractable roof. So in case it rains and you only have Lotus or Ground Pass tickets, you can upgrade them to Diamond. That way you can still enjoy some tennis and won’t have to have your whole day cancelled. 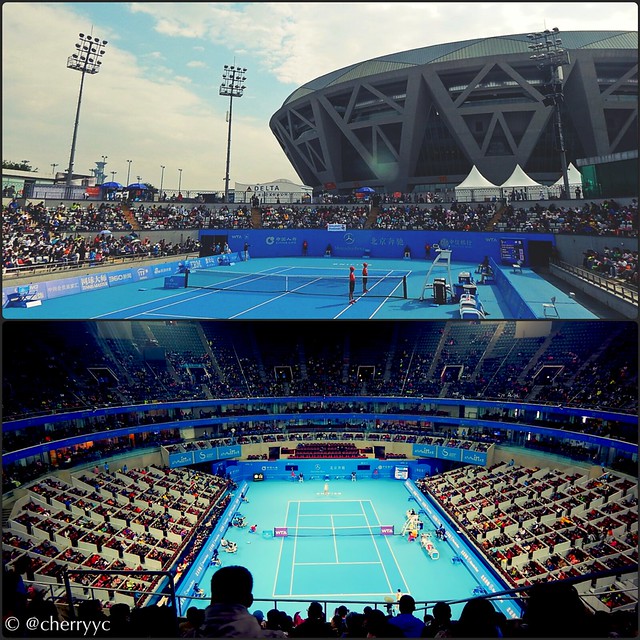 Although I bought Diamond Court tickets for all of my three days and two nights at the China Open, what I would recommend most is the Ground Pass tickets. They only cost 10 RMB (about 1.6 USD) everyday and can get you access to all competition courts other than Diamond and Lotus, not to mention all the 6 practice courts that are all accessible to fans. So even if you are not interested in those matches happening on the outer courts, with less than 2 dollars everyday, you are guaranteed to be able to see the practice sessions of some of tennis’ biggest names like Maria Sharapova, Novak Djokovic or Rafael Nadal at least a couple of times. Pretty sweet, huh? If your goal is to collect autographs, then you better get to the practice courts early and grab an ideal spot, especially for those aforementioned big stars. Oh, and a bonus: This year’s Ground Pass ticket is incredibly cute, and it is a prepaid postcard that you can mail it out to your friend right from the mailbox on the grounds! 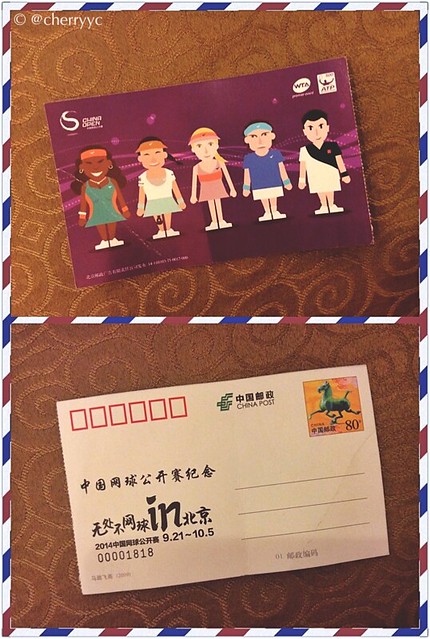 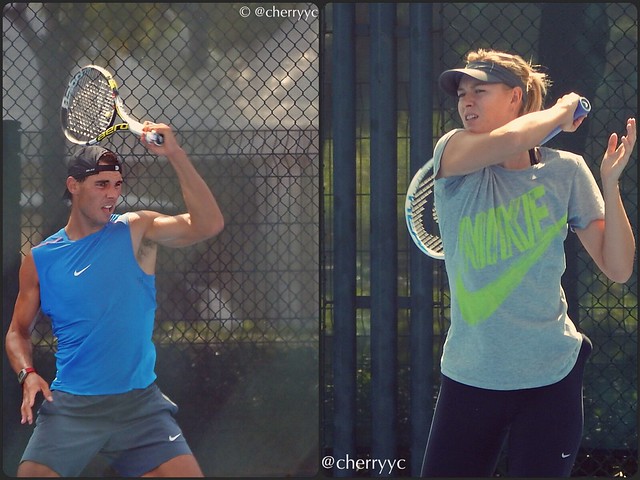 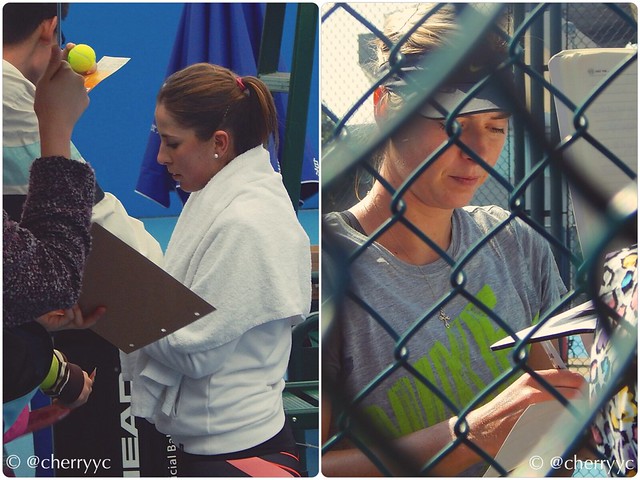 The practice courts are not the only place where you can get real close to the players. From time to time, some players will participate in certain fan activities held by their sponsors on grounds. This year, Andy Murray attended an activity in Jacob’s Creek’s lounge, and Grigor Dimitrov went to the Rolex booth for a sponsorship event. In addition, players like Samantha Stosur, Lucie Safarova, Richard Gasquet, etc. were all once at a sponsor tent interacting with and signing for the fans.

Throughout the years, the China Open, or even the whole Asian Swing has been criticized by fans for empty stands and thus, lack of atmosphere. I would say that is not the case at the China Open. The 7-day holiday generates a decent flow of spectators, many of whom are university students in Beijing, to the National Tennis Center. I was there for three days and two nights, and for all sessions the Grand Stand seats on Diamond Court were overall rather decently filled. The fans are mostly quite knowledgeable about tennis and very passionate about their favorite players. When roaming around the grounds, you can frequently see fans carrying banners or with flags drawn on faces ready to cheer for their favorites. During the tournament, some fans, despite not even knowing each other beforehand, will even get together and form a cheering squad for their players, and occupy a particular section of the stand, loyally waving flags and chanting “Come On’s” and “Let’s Go’s” enthusiastically. You have probably already seen “NoleFam” or “SharaFamily” being given screen time during matches. The atmosphere during majority matches were great, and fun, even though the biggest crowd favorite Li Na was absent this time. 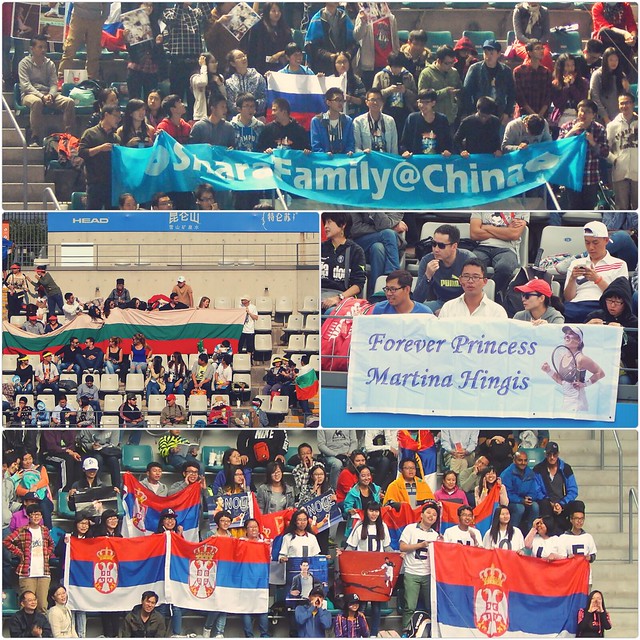 There are a few concession stands on the grounds if you want to get food and drinks, and also vendors inside Diamond Court. However, the choices are quite limited. You can get proper meals like rice and noodles, but most people would just go for quick snacks, such as popcorn and hotdogs, mostly because the prices are quite a lot higher than buying them at regular stores off the grounds. I would expect more stores to enter China Open in the coming years to boost on-site competition and hopefully lower the prices a little, but for now I would suggest that you bring some snacks along with you to the Tennis Center if you don’t want to over-spend on the food. One more thing to note, you are not allowed to bring your own drinks to the grounds, and there doesn’t seem to be water fountains, so just go buy the Kunlun Mountains Mineral Water (of which Li Na is the brand ambassador) from the vendor as it costs the same as on the outside. 😛

In recent years, the Internet and social media have become more and more of an integral part of live sports. Almost all tennis tournaments now have their respective official Twitter accounts, where fans will get live updates on various aspects of the tournament, such as player practice schedule, on-site events, fan activities, etc. And for fans, tweeting updates and photos directly from where you are so that you can keep your fellow fans in other parts of the world in circle has all become part of the live experience. The China Open is no different, even though we all know that many of the popular social media sites are still officially censored in China. Compared to its official Twitter, the China Open’s official Weibo account (the Chinese version of Twitter) undoubtedly provides updates and important information more promptly. Even if you don’t know a word of Chinese, there’s no harm in checking it out from time to time for the above mentioned updates. Some information like practice schedules are normally given in English directly, however, there is no WiFi available on site, so you have to drain your cellular data for Internet connection. Hopefully, they will consider implementing WiFi covering the whole grounds in the years to come.

I had an absolute blast at the China Open, with Maria winning the tournament being icing on the cake. It was just as fun as my other live tennis trips to the US Open, Wimbledon, and Indian Wells in previous years, and I would certainly love to be back for more.