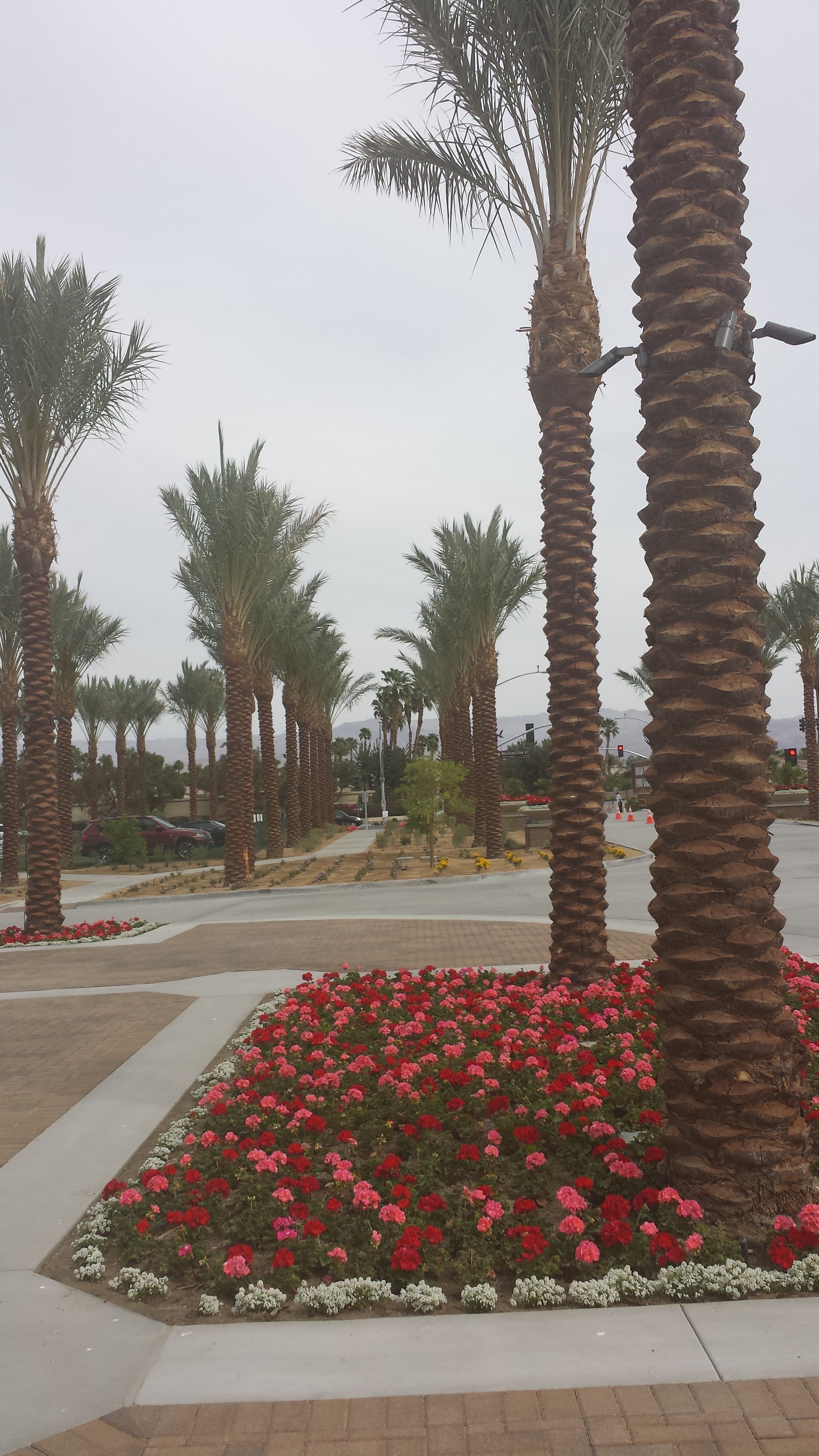 While in LA, I checked out the improvements to the tournament in Indian Wells.  I arrived on Tuesday at 1 pm and left on Thursday morning. I bought a general admissions ticket ($53) for Tuesday and loge tickets for both day and evening sessions ($115) on Wednesday. If Wednesday’s OOP turned out to be compelling, I planned on upgrading my ticket to a stadium or courtside box seat (This is an unadvertised  benefit. You can pay the difference for a better seat, if seats are available on the day). Unfortunately, I didn’t get to the Box Office early enough on Wednesday morning and all box seats were sold out for the day session.

First the good news. The new stadium 2 has some great new food offerings with major restaurants Nobu, Piero Pizzavino, and Prime Chop House. I joined some twitter friends for drinks and pizza at Pizzavina after Federer won his match against Haas on Wednesday. After sitting in direct sunlight for hours, it felt good to skip the picnic table vibe and sit in an actual restaurant without having to leave the site. A glass of wine ($8) and shared pizza ($18) make it a modest hit to even the most limited budget. I didn’t get to Nobu, but my Twitter buds sampled it and had nothing but great things to say about the meal. Fair warning: in order to sit by the seats with a view of the stadium 2 court, you must spend a minimum of $100. Other great improvements to the site include: free charging stations for your cell-phone, filtered drinking water stands, and a stellar app to help you keep track of player practices in case you want to ogle players up close. Get to the practice courts early (at least an hour before practice time) for the usual suspects: Rafa, Federer, Murray, and Djokovic.

Stadium 2 boasts 8,000 seats, a nice increase over its older version which now appears to be stadium 3 at 6,200 seats.  While it’s great to have more unreserved seating for those with any ticket including general admissions, I admit to missing the intimacy of the older stadium with its close proximity to the action. The new 200 and 300 level of unreserved seating, reminiscent of Armstrong at the US Open, is still better than loge in Stadium 1. There is also a change with ticketing. In previous years, Stadium 1 box seat ticket holders had a portion of section 100 in Stadium 2 reserved  for them. That is no longer the case. Like anyone else, they must now purchase a reserved seat in Stadium 2 in addition to any seating they in Stadium 1.  Unless you absolutely must see the very top players, it might be worth it to get a reserved seat on Stadium 2 rather than one for Stadium 1. At a fraction of the cost, you can see more entertaining and competitive matches earlier in the tournament. If you are lucky, you might even see Fedrinka, Murray and Djokovic playing doubles as some managed to do this week.

Sadly, even though the tournament has increased its capacity for fans, we haven’t seen the same increase in hotels to accommodate the new demand. It was very challenging to find a modestly priced hotel in close proximity to the tournament. If you have a car, Palm Springs (30 minutes from site) is still a bargain but after long days in the sun and a little bit of alcohol, that drive can be a daunting prospect. Luckily, Airbnb exists and I was able to find a generous and accommodating host ($80 per night) who even drove us back and forth to the tournament site. I expect that the accommodations drought will eventually change as the tournament seems hell bent on becoming the slam of the West. An important aside: I mostly travel the ATP World Tour, so while the BNP Paribas Open is fantastic for men’s action, it’s still not a full house for the Women’s Tennis Association (WTA) as the Williams’ sisters do not come to Indian Wells. For that reason alone, I’m not quite ready to embrace the notion that it’s the best place to catch tennis outside of a slam for both tour.

Was it worth it to venture to the desert for a day and half?

I have had a few folks ask about the best way to tackle Indian Wells and I have to admit that while I did feel a trace of envy at those who were at the tournament the entire time, my full day on Wednesday was a good compromise. On Tuesday, I caught a bit of Federer at practice, wandered around and noted the changes to the grounds and just soaked in bits of live tennis. On Wednesday, I took advantage of BNP Paribas Open uniting both sides of the draw on a single day and sat in Stadium 2 for a full day of tennis. I then moved to Stadium 1 for Federer vs. Haas and then returned to Stadium 2 for Fedrinka doubles to finish off my day.   I shared the trip with a friend I met via Twitter who hadn’t been to the tournament in a few years and it was just enough to whet her appetite for more.

Food: $50 (usually less but I sampled the restaurant)

* missing flight information which was only $147 OW on Virgin America.