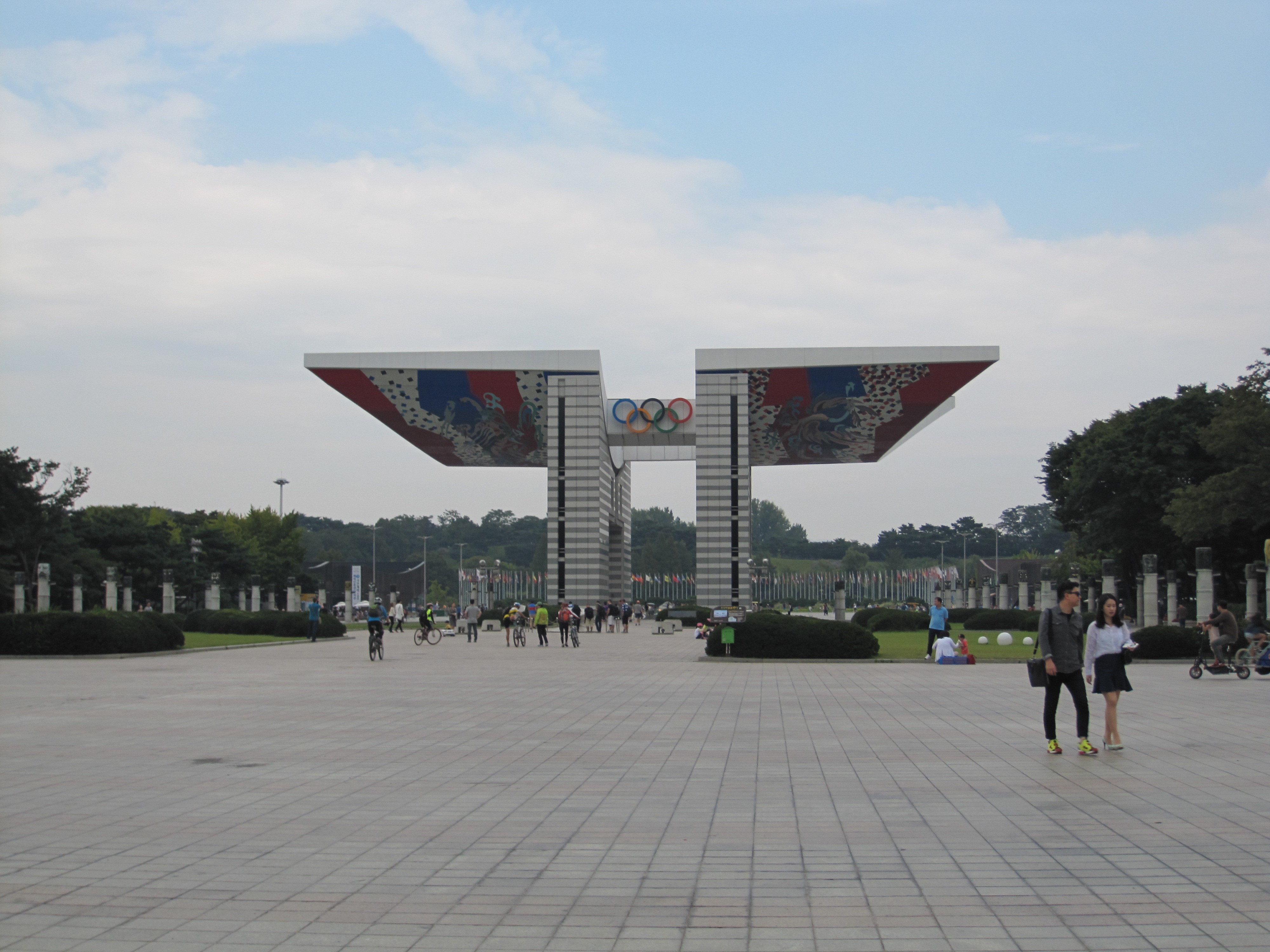 (As it looks like I might not make the Asian swing this year, I asked Joanna to provide some insights on one of the tournaments on the tour. Based upon her overview,  I need to add the Kia Korea Open to my list of sites to visit when I get back on the road in Asia. I love the intimacy and accessibility of the tournament. All images were provided by Joanna.)

Since 2004, the Korea Open has taken place at the Seoul Olympic Park Tennis Center. This year, Kia Motors took over as the main sponsor, so a bright red Kia banner will greet you as soon as you enter the grounds.

This is a historic venue, which hosted the Tennis event at the 1988 Olympics, where Steffi Graf won her gold medal. The Center Court has a capacity of 10,000 people and the venue has been used for many of Korea’s Fed Cup and Davis Cup ties in recent years.

You also have the option of browsing the grounds for free — you can watch all of the outer court matches without having to pay any entrance fees. You get free admission to qualifying rounds as well. Such are the perks of a smaller tournament! A VIP ticket will grant you access to an air-conditioned lounge with complimentary food and drink. This year, the Korea Open offered locker-services for spectators who want to store their belongings in a safe place.

Player Access: The Korea Open has attracted a solid draw over the years. You can browse the practice courts just outside Center Court, where you will see players training with their coaches and colleagues. It’s a relatively small venue, so you can keep track of everything happening on-site. I’ve seen Aga Radwanska’s coach engage in hitting sessions with other coaches for hours on end. It’s not uncommon to see a player lounging just beside the food stands. The back entrance to Center Court is located right across from the WTA offices and lounge area. You’ll occasionally see tennis players run out of the building for a light jog before their matches. Last year, I saw Kimiko Date Krumm do a series of warm-up exercises with her trainer, right before her match.

For autograph hunters, practice courts are your best bet. Every year, Adidas, Yonex, Wilson and Babolat pop-up stands are set up right outside Center Court and players will show up for promotional activities. This year, Maria Kirilenko did a signing session for Yonex. What’s nice is that you rarely have to wait in line for more than 20-30 minutes for these events. There’s a solid crowd but it’s rarely overwhelming.

This year, I saw Yanina Wickmayer practicing on the outer courts with her coach. She had already lost in singles but she was out on the courts again preparing for her other tournaments in Asia.

Food/Drinks: You’ll find plenty of concession stands right outside Center Court, along with food vendors inside the stadium. The options range from sandwiches, hot dogs, fried chicken, rice rolls to cup noodles and pretzels. It’s standard fare, but the prices are reasonable (you could easily find a quick meal for under 10,000 KRW). There’s a coffee vendor on site for your ice-coffee and ice-tea cravings. Beverages are reasonably priced (4,000-5,000 KRW) and there are convenience stores nearby. Chairs and tables are set up for spectators to rest their legs in between tennis matches. A big screen is set up to show Center Court matches.

If you’re looking for a sit-down meal or a place to cool off from the sun, there is a row of restaurants just across the street from Center Court. The café that used to sell reasonably priced sandwiches has temporarily closed down, but you will find other Korean/Chinese options here (the prices will be a bit steeper though — think $20-$25 per person for a meal).

Off Court: If you want to explore the rest of Olympic Park in between matches, there are plenty of scenic areas where you can sit down or go for a relaxing walk. You can head toward the World Peace Gate (South Gate 4), which is about a 10-minute walk from the tennis courts. There are big coffee houses and restaurants in that area and you can walk up the trails to get a view of Seoul.

You may have seen the photos Aga Radwanska

tweeted from their hotel in Korea. They’re staying at the Lotte Hotel in Jamsil, which is a five-minute taxi ride (one subway stop away) from the Olympic tennis courts. The Lotte Hotel is connected to an amusement park, which attracts plenty of crowds and tourists. There’s a walking trail that surrounds the outdoor portion of the amusement park. Over the years, tennis players have taken to this area for jogging and training.

The Lotte Hotel is located at the Green (Number 2) subway line in Jamsil, which runs through all the major stops in Seoul. You can take the Green line straight to Kangnam station (6 stops away from Jamsil) and take in the sights. The Green line also takes you to Samseong Station, which is connected to the City Airport Terminal at COEX, which offers bus service to Incheon International Airport for 15,000 KRW ($15) at 10-15 minute intervals.